HISTORY OF THE FLASHREPORT

I have been producing the FlashReport digest on California political news since April 2001. Many, many individuals inquire as to how the FlashReport began. Here’s the story:

In the 2000 Presidential Election Cycle, I served as the Executive Director of the California Republican Party. During that period of time, I would routinely access the internet early each morning, devouring all of the political news I could find – local or national, it didn’t matter. At some point, I started forwarding along articles of interest to the Party Chairman and eventually to other board members. As this went along, I became more adept at quickly looking through online sites to find articles of particular interest to the California Republican Party. By the time my term was done, I was creating e-mail ‘digests’ of news for the board. 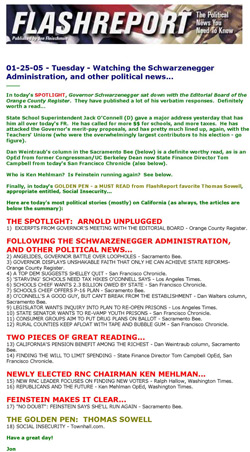 The FlashReport started as an e-newsletter, before going online at FlashReport.org.

I left my position with the CRP when Chairman John McGraw retired, and the CRP members elevated then-Vice Chairman Shawn Steel to the Chairmanship. I had an opportunity to take on a new and challenging role in media relations for the Orange County Sheriff’s Department. The position was very challenging, but it was non-partisan.

He may not remember, but I was having lunch in San Clemente in April of 2001 with a friend and political mentor, Ken Khachigian. When I told Ken my regrets about losing contact with so many of my friends and political comrades, he suggested that I might expand my e-mail clippings (which I had been sending him, too). Thus began the FlashReport.

In May of 2001, I sent an e-mail to the thousands of contacts in my Outlook. In it, I sent a little note, and my first issue! I told everyone that I didn’t believe in spam, but that if they liked what they read, to let me know and I would sign them up! To my surprise, the response was overwhelming. Not hundreds but almost two thousand people signed up – and that was years ago.

Over the years, the list of subscribers has grown to include local, state and federal elected officials and their staff members, political activists and donors, lobbyists and consultants, political reporters, business owners, homemakers, and anyone with an interest in California politics. What started as a couple of thousand has multiplied many, many times over.

Over the next four and a half years, I added my daily commentaries and features such as the “Spotlight”, the “Golden Pen” and even the “Trash Can” for my friend Garry South.

For years I had been thinking about whether and how to get the FlashReport onto a website. I liked the uniqueness of a product delivered by e-mail, but going online would mean I could probably get more readers, and it would make it a lot easier for me to produce my daily report.

While I was having these thoughts, a friend of mine in Florida, Justin Sayfie, had launched his own website with a compendium of Florida political news, and it was growing in popularity. While his site isn’t overtly partisan (though Justin is a staunch Republican), I was intrigued by the way it was organized. 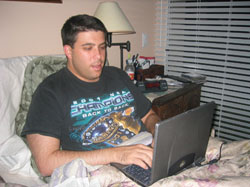 Jon is up early every morning, updating FlashReport.org from his bed.

During the summer of 2005, I finally decided that I would move forward with creating FlashReport.org. I sent out a note to a few of my most loyal subscribers, and was able to raise what I needed to create this site!

In 2005, Justin out in Florida had his site completely redone by a web-solutions firm out of Orlando called Cloudspace. With Justin’s positive recommendation, I approached them about designing FlashReport.org.

So there you have it, now the FlashReport is online, and it is my hope that you will enjoy visiting this website over and over, for the political news I link to, and especially for the editorials, columns and commentary! Which gets to the "why" I do this question…

The answer is simple - passion. I have a passion for politics! Sharing and discussing political news, and the satisfaction of passing along to people some of the most interesting and provocative columns and stories is a lot of fun.

I hope that you enjoy visiting FlashReport.org as much as I enjoy producing it!